NIBIRU believers who are convinced a mythical planet will head towards Earth next month have been sent into overdrive after NASA confirmed it is monitoring the approach of a big celestial object.NASA’s close eye on the space rock is proof Nibiru, also known as Planet X, is real, according to theories.Some have linked the planet to an asteroid called 2012 TC4, which is due to make a staggeringly close pass of Earth on October 12.NASA earth defense specialists are closely monitoring the close approach of the asteroid.\Conspiracy theory channel Igor Kryan wrote: “WOW Nibiru fears were right: something huge from deep space coming to earth and it is coming closer than a distance between New York & Tokyo.“On October 12 New Yorkers will be closer to the object 2012 TC4 than to Tokyo.“It will come thousands of times closer to Earth than feared Francesca mega asteroid.” 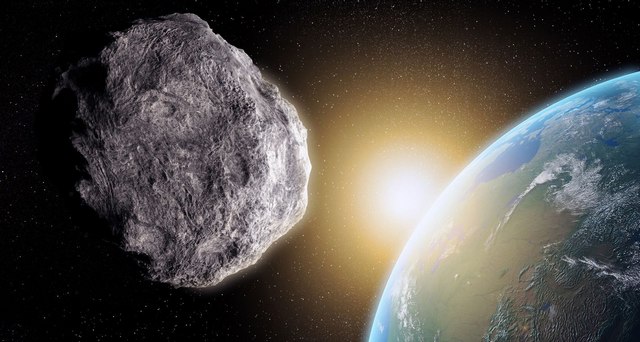 Nasa claims the asteroid has nothing to do with Nibiru, which Nasa claims is an internet hoax.

The space rock is believed to be bigger than the Chebylinsk meteor which exploded above Russia, damaging thousands of buildings and injuring 1,500 people.Nasa is convinced it will not impact, but say it will skim earth at a distance of about 4,200 miles, which is a cat’s whisker as astronomical terms.Asteroid 2012 TC4 is estimated to be between ten and 30 meters (30 and 100 feet) and will pass by earth on October 12.The 20-metre Chelyabinsk meteor exploded in the atmosphere above the Russian city unexpectedly on February 15 2013.No space agency had any idea it was approaching before the explosion ripped through the air.About 26 to 33 times as much energy as that released from the atomic bomb detonated at Hiroshima was released.Most injuries sustained were from flying broken glass from buildings damaged by the strength of the explosion.NASA astronomers are aware of the pass of the larger 2012 TC4 and said they were excited about what could be learned from it.

A spokesman said: “They plan to use its upcoming October close approach to earth as and opportunity not only for science but to test Nasa’s network of observatories and scientists who work with the planetary defense.“Even though scientists cannot yet predict exactly how close it will approach, they are certain it will come no closer than 4,200 miles (6,800 kilometers) from the surface of the earth.”Michael Kelley, program scientist and NASA Headquarters lead for the TC4 observation campaign, said: “Scientists have always appreciated knowing when an asteroid will make a close approach to and safely pass the earth because they can make preparations to collect data to characterize and learn as much as possible about it.“This time we are adding another layer of effort, using this asteroid flyby to test the worldwide asteroid detection and tracking network, assessing our capacity to work together in response to finding a potential real asteroid threat.”

Astronomers from Nasa’s Center for Near-Earth Object Studies (CNEOS) at the Jet Propulsion Laboratory in Pasadena, California, have determined that it could even pass much farther away, as far as 170,000 miles (270,000 kilometers), or two-thirds of the distance from Earth to the moon.These calculations are based on only seven days of tracking 2012 TC4 after it was discovered on Oct. 5, 2012, by the Panoramic Survey Telescope and Rapid Response System (Pan-STARRS) from Haleakala on the island of Maui, Hawaii.Further observations are needed to more precisely determine the asteroid’s orbit, which has been out of range of telescopes since 2012.The spokesman added:

“Asteroid 2012 TC4 may be slightly bigger than the space rock that hit Earth’s atmosphere near Chelyabinsk, Russia, in February 2013.“As it starts to approach Earth this summer, large telescopes will be used to detect it and re-establish the asteroid’s precise trajectory.“The new observations are expected to help refine knowledge about its orbit, narrowing the uncertainty about how far it will be from Earth at its closest approach in October.”Paul Chodas, manager of the CNEOS at JPL said: “This is the perfect target for such an exercise because while we know the orbit of 2012 TC4 well enough to be absolutely certain it will not impact Earth; we haven’t established its exact path just yet.

“It will be incumbent upon the observatories to get a fix on the asteroid as it approaches, and work together to obtain follow-up observations than making more refined asteroid orbit determinations possible.”The Nibiru theory is that a mini solar system consisting of a sun, planets, and moons is lurking on the edge of our solar system with a huge orbit of the sun.Nibiru believers are convinced the “rogue system” is making its way from the outer solar system inwards, where it will wreak havoc on Earth as it passes at about four million miles away, but causes the poles to switch and great earthquakes and volcanic eruptions.It emerged in 1976, when writer Zecharia Sitchin claimed that two ancient Middle Eastern cultures – the Babylonians and Sumerians – told of a giant planet – Nibiru – that orbited the Sun.The Niribu story was linked to the beginning of the end of the world by Christian fundamentalists, who believed the rapture would start on September 23 and was connected to celestial activity as interpreted from passages in the Bible.