An ancient city lost for 1,200 years has been discovered in the Cambodian jungle by archaeologists using laser scanning technology.

The city, which was linked to Cambodia’s famous Angkor temples complex, was uncovered using airborne lasers which penetrated thick vegetation to provide evidence of roads, canals and buildings.

The discovery was announced in a peer-reviewed paper released early by the journal Proceedings of the National Academy of Sciences.

The lost city of Mahendraparvata was found atop Phnom Kulen mountain in Siem Reap province, about 25 miles (40km) north of the Angkor complex.

“What we have now with this instrument is just ‘bang’ – all of a sudden, an immediate picture of an entire city that people didn’t know was there before, which is remarkable,” University of Sydney archaeologist Damian Evans, the study’s lead author, told Australia’s The Age in a video interview from Cambodia.

“So instead of this kind of very long gradual process, you have this kind of sudden eureka moment where you bring the data up on screen the first time and there it is – this ancient city very clearly in front of you.”

The laser technology, known as lidar, works by firing laser pulses from an aircraft to the ground and measuring the distance to create a detailed, three-dimensional map of the area.

It is a useful tool for archaeologists because the lasers can penetrate dense vegetation and cover swathes of ground far faster than they could be analysed on foot.

Lidar has been used to explore other archaeological sites, such as Stonehenge. 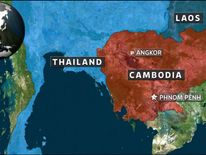 The new city was found 25 miles north of Angkor, deep in Cambodia

In April 2012, the Australian researchers loaded the equipment onto a helicopter, which spent days crisscrossing the dense forests from 800 metres above the ground.

The team then confirmed the findings with an on-foot expedition, hacking their way through thick jungle.

“We had reasonable expectations, I guess, of what we would find using the lidar data, but what we’ve ended up with has just blown our minds,” Mr Evans told The Age.

“It’s just absolutely incredible what we can see.”

Even the archaeologists’ local guide had no idea of the existence of many of the temple complexes discovered using the data.

The origins of the city have been dated to about 800AD, at the start of the Khmer Empire that went on to build all the Angkor temples.

At their height, around 900AD, the Hindu-worshipping Khmers ruled over most of the area that is now Cambodia, Thailand and Laos.

The researchers theorise the civilisation at Mahendraparvata, like that at Angkor, eventually collapsed because of deforestation, and broken canals and reservoirs after the 15th century.

Mr Evans told the newspaper it is still not known how large Mahendraparvata was because the lidar search only covered a limited area.

“The network doesn’t stop at the edge of the survey area,” he said, adding that money is being raised for further research.

“Maybe what we are seeing was not the central part of the city, so there is a lot of work to be done to discover the extent of this civilisation.”

With little known about the origins of the Khmers, it is hoped that exploration of the site will shed new light on how and why the civilisation flourished and then died.