The intriguing find of the remains of a ‘noblewoman’ from the ancient Okunev Culture was made in the Republic of Khakassia.

The Okunev people are seen as the Siberian ethnic grouping most closely related to Native Americans. In other words, it was ancestors of the Okunevs who populated America, evidently using primitive boats to venture to the ice-covered Beringia land bridge some 12,600 years ago.

The mysterious ancient culture was ‘unparalleled’ in Siberia in terms of its artistic richness and diversity, according to experts.

Undisturbed by pillaging grave robbers, the burial site of the woman, also containing the remains of a child, offers a wealth of clues about the life of these ancient people.

The head of the expedition Dr Andrey Polyakov said  the grave of the ‘noblewoman’ dated back to the Early Bronze Age, between the 25th and 18th centuries BC.

‘For such an ancient epoch, this woman has a lot of items in her grave,’ he said. ‘We have not encountered anything like this in other burials from this time, and it leads us to suggest that the items in her grave had some ritual meaning.

‘We hope to get even more rare and spectacular finds next year, when will  continue to study this unique (burial) mound and open the central burial plot.’

Around 100 decorations made from the teeth of different animals mark the special status of the woman. Picture: IIMK RAS

Archeologists believe the woman ‘enjoyed a special status during her lifetime’, as indicated by around 100 decorations made from the teeth of different animals, items carved from bone and horn, two jars, cases with bone needles inside, a bronze knife, and more than 1,500 beads that embellished her funeral costume.

‘Its importance is hard to overestimate. All such images previously discovered had been found only on cliffs or separate stones. Now there is the prospect to find out when they were made.’ 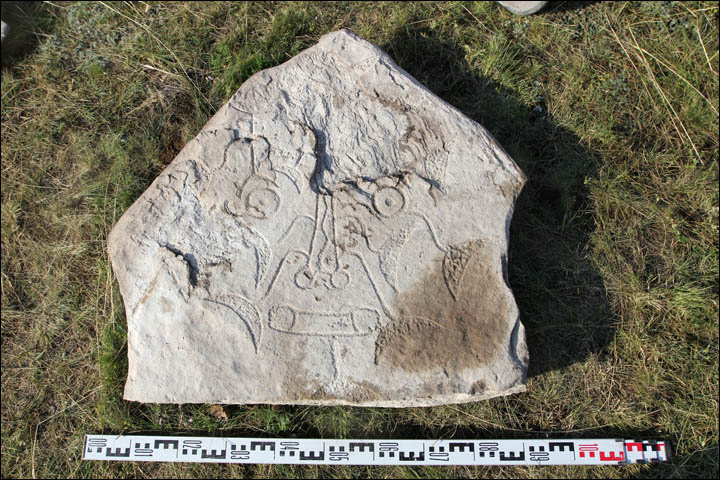 He made clear: ‘Now, thanks to our current research, we can definitely say that these rock arts were made by the representatives of the Okunev culture.’ After precise dating and restoration, the incense burner will be exhibited at the world famous Hermitage Museum in St Petersburg, he said.

The location where the finds were made is known as the Itkol II burial site, in the Shira district of Khakassia. Excavations began here in 2008 – with some 560 finds in total so far – but there is a sense that the best is yet to come.

Another find is a stone slab with a rare image of a bull having a long rectangular body. These are not common in southern Siberia, but are known on the territory of modern-day Kazakhstan. Archeologists see this as an indication that Okunev people may have migrated to Khakassia from the south. 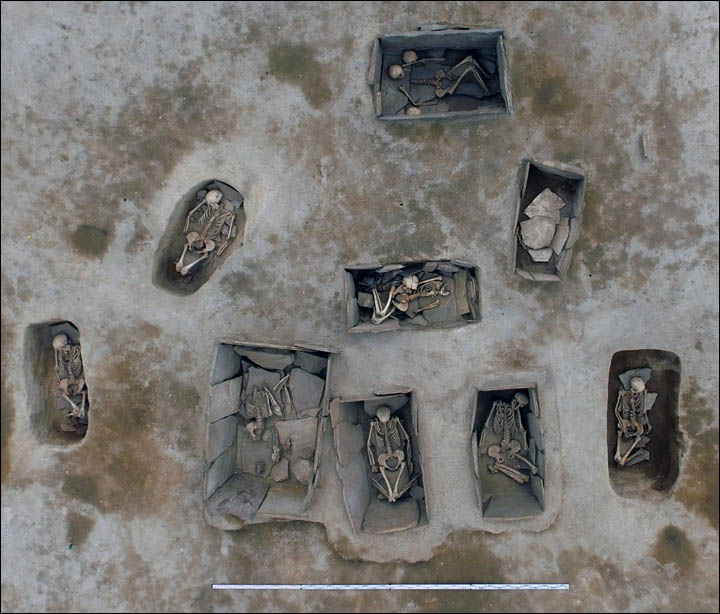 Excavations began here in 2008 – with some 560 finds in total so far – but there is a sense that the best is yet to come. Picture: IIMK RAS

Does this mean modern-day Native Americans originated from Kazakhstan and not southern Siberia, as previously thought? We await more scientific evidence.

The stone roofs of some graves on a burial hill at Itkol II also bear chiseled images – known as Okunev faces. Archeologists believe they are not faces of real people, but more likely images of spirits, gods and other supernatural deities. One of the faces belongs to a type never seen before, although details of this find have not been made public so far.

The culture owes its name to the locality of Okunev, in the south of Khakassia, where the first burial site of this type was excavated in 1928. The Okunev Steles – anthropomorphous stone columns several meters tall – are the most widely known monument attributed to this culture.

The top of these steles has the shape of a bird’s beak. The middle part is decorated with images of one or several anthropomorphous creatures, while the lower part resembles the open mouth of a snake. 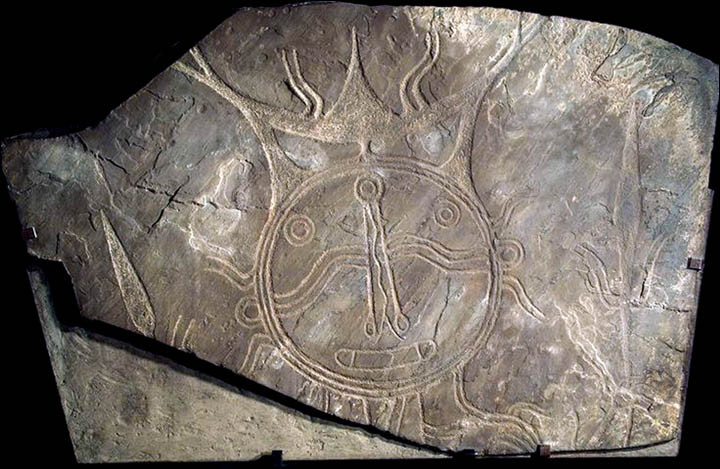 Experts see this as evidence of sophistication in these ancient people’s beliefs. They maintained that the world around them consists of three major elements.

Dr Polyakov said: ‘Okunev archaeological culture is a unique phenomenon of the Early Bronze Age of Southern Siberia. We have a huge quantity of artistic heritage in the form of numerous images – ‘masks’, carved or engraved on the rocks. They have special style, which is a kind of symbol of Okunev culture.’

Until now, the experts ‘could not prove the direct connection of the rock art and Okunev burial grounds’. This has now changed.

*TWO YEARS AGO, Siberian angler Nikolay Tarasov, then 53, was fishing for carp.

Instead he pulled out of the water a 4,000 year old ‘unique and amazing’ pagan god statuette carved in horn but later fossilised. The figurine had almond-shaped eyes, a large mouth with full lips, and a ferocious facial expression. The find was believed to be from the Okunev culture.

We have a huge quantity of artistic heritage in the form of numerous images – ‘masks’, carved or engraved on the rocks. They have special style, which is a kind of symbol of Okunev culture.’ Pictures: Boris Dolinin