The mysterious origins of the British archaeological site most often associated with the legend of King Arthur have just become even more mysterious.

Archaeologists have discovered the impressive remains of a probable Dark Age royal palace at Tintagel in Cornwall. It is likely that the one-metre thick walls being unearthed are those of the main residence of the 6th century rulers of an ancient south-west British kingdom, known as Dumnonia.

Scholars have long argued about whether King Arthur actually existed or whether he was in reality a legendary character formed through the conflation of a series of separate historical and mythological figures.

But the discovery by English Heritage-funded archaeologists of a probable Dark Age palace at Tintagel will certainly trigger debate in Arthurian studies circles – because, in medieval tradition, Arthur was said to have been conceived at Tintagel as a result of an illicit union between a British King and the beautiful wife of a local ruler. 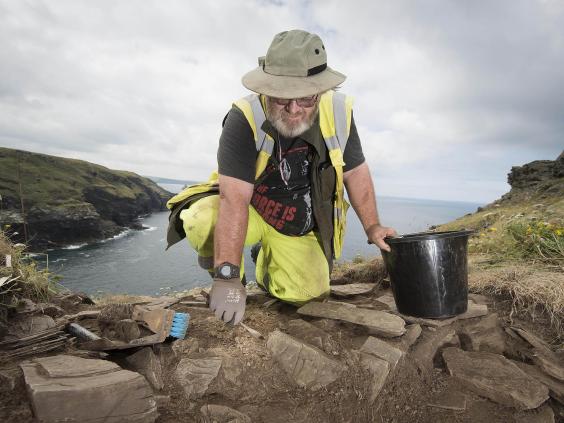 The account – probably based on an earlier legend – was written by a Welsh (or possibly Breton-originating) cleric called Geoffrey of Monmouth. The story forms part of his greatest work, Historia Regum Britanniae (History of the Kings of Britain), one of the most important books ever produced in the medieval world.

Significantly, it was almost certainly completed by 1138 – at a time when the Tintagel promontory (where the probable Dark Age palace complex has been discovered) was uninhabited. The medieval castle, the ruins of which still stand today, was built almost a century later. Geoffrey of Monmouth’s assertion thatKing Arthur was conceived in an earlier by then long-abandoned great fortress on the site would potentially therefore have had to have come, in the main, from now long-lost earlier legends, claims or quasi-historical accounts.

The probable palace which the archaeologists have found appears to date from the 5th and 6th centuries AD – which would theoretically fit well with the traditional legends of King Arthur which placed him in precisely those centuries. Whether coincidence or not, the way in which the new evidence resonates with Britain’s most enduring and popular medieval legend is sure to generate renewed popular and scholarly interest in the site. 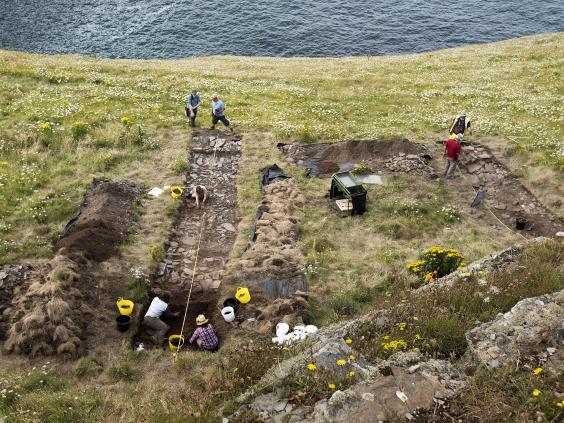 What the archaeologists have found is of major historical significance – irrespective of the veracity of any Arthurian connection. It’s the first time in Britain that really substantial buildings from the 5th and 6th centuries – the very heart of the Dark Ages – have been found. So far the excavations have revealed massive metre-thick masonry walls, steps and well-made slate flagstone floors.

Some of the buildings were relatively large. Around a dozen have been archaeologically or geophysically located over recent months. Two are around 11 metres long and 4 metres wide. 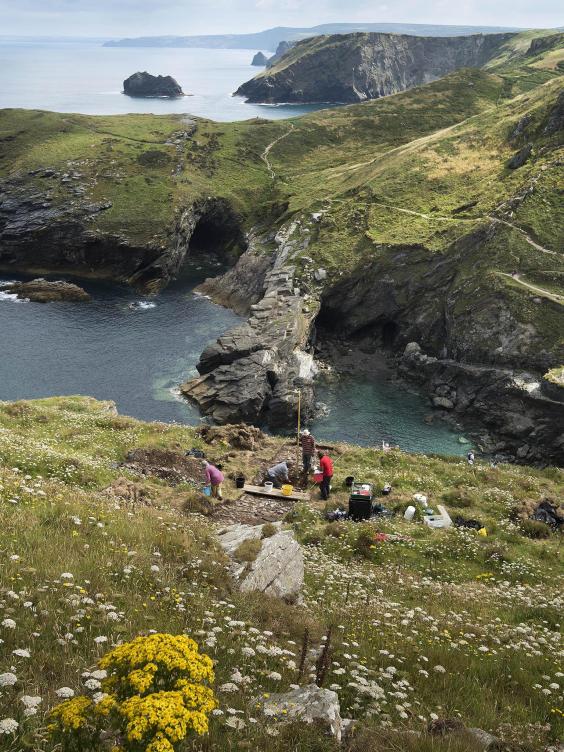 The people who lived in these well-constructed buildings appear to have been of elite status. The archaeological evidence – scores of fragments of pottery and glass – show that they were enjoying wine from what is now western Turkey and olive oil from the Greek Aegean and what is now Tunisia. What’s more, they ate their food from fine bowls and plates imported from western Turkey and North Africa, while they drank their wine from the very finest, beautifully painted French-made glass cups.

Over the past few weeks around 150 shards of pottery have been found – including fragments of amphorae (used to transport wines and olive oil from the Eastern Mediterranean) and fine tableware.

The probable palace appears to have been the more luxurious part of a much larger complex of literally dozens of buildings which covered most of the Tintagel promontory. These other structures may well have housed artisans, soldiers and other retainers who worked for the ruler who lived there – probably the King of Dumnonia

The whole complex appears to have come into existence some time in the 5th or the early 6th century AD – but was probably in decline by the early 7th.

So far, no evidence of any catastrophic destruction has been found. However, the latter half of the 6th century and the 7th century were notorious for a terrible plague pandemic (an early version of the later medieval Black Death) which almost certainly devastated parts of Britain after having killed millions throughout the Mediterranean world. It is conceivable therefore that Dark Age Tintagel declined and was eventually abandoned partially as a result of bubonic plague rather than any political or military conflict.

Quite apart from what the new discoveries tell us about royal life in Britain 1,500 years ago, they also shed additional light on western Britain’s place in the world all those centuries ago.

Although eastern and much of central Britain had been taken over by Germanic (ie, Anglo-Saxon) conquerors and settlers from what is now Germany and Denmark, much of the west of Britain (including Cornwall) remained under native British control. 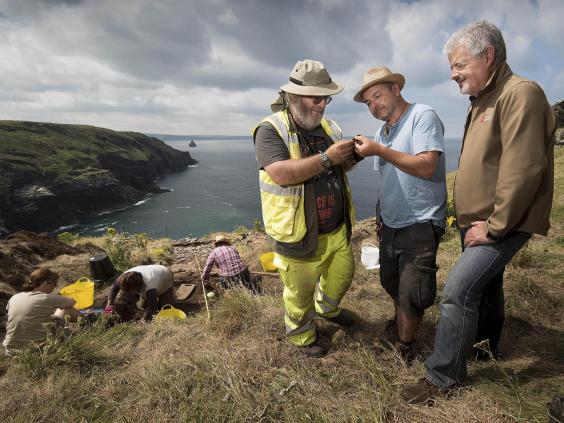 These native British areas seem to have maintained or more likely revived their trading and political links with the Roman Empire. The Romans had abandoned Britain in AD410 and had completely lost the whole of Western Europe to Germanic barbarian invaders by 476. However, by 554 the Empire (by then entirely based in Constantinople – modern Istanbul), was reconquering parts of the Western Mediterranean world – namely Italy, North Africa and southern Spain. As a result Roman trade into the Western Mediterranean and the Atlantic (including Britain) began to flourish once again.

The big incentive for the Romans to trade with Britain was probably Cornish tin, which they needed for their bronze-making industries. It’s also conceivable that they regarded Dumnonia, or indeed other western British kingdoms, as client states or official allies, possibly with some quasi-official status within the Empire. Indeed, officially, they may have regarded the loss of Britain in 410 as a temporary and expedient measure rather than a permanent change in legal status. Certainly there is historical evidence that the Empire gave financial subsidies to Britain in the 6th century – ie, well over a century after the traditional date for Britain’s exit from the Empire. There is even evidence suggesting that the 6th century Roman authorities tried to use their theoretical “ownership” of Britain as a territorial bargaining chip in wider geopolitical negotiations. 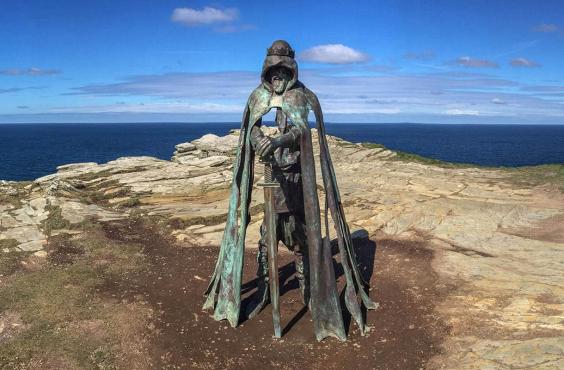 This summer’s excavation at Tintagel, which finished on Tuesday, has been directed by archaeologist Jacky Nowakowski and James Gossip of the Cornwall  Archaeological Unit – part of Cornwallcounty council.

“The discovery of high-status buildings – potentially a royal palace complex – at Tintagel is transforming our understanding of the site. It is helping to reveal an intriguing picture of what life was like in a place of such importance in the historically little-known centuries following the collapse of Roman administration in Britain,” says Win Scutt, English Heritage’s properties curator for the West of England.

The Tintagel promontory –  the site of the famous ruined 13th century castle – is managed by English Heritage and is open to the public.