Archaeologists in have unearthed two Maya tombs that “miraculously escaped” looters’ tunnels underneath two Maya pyramids, where researchers hope that jade-inlaid teeth, an inscribed human tibia and a puzzling sun-god pendant could give insight into the rule of ancient “snake kings”.

The tombs were found at the ancient ruins of Holmul, 300 miles north of Guatemala City, and date back to about 650-700AD, the era of Maya dominance before their a few centuries later.

Inside one was a puzzling artifact of a Maya dynasty that archaeologists call the snake kings, after the snakehead emblem of their house – a family that ruled 100 miles to the north, far from the tombs found in Holmul.

One tomb is a vaulted chamber, built into a pyramid that was constructed to surround an older, fifth-century building. Inside was the skeleton of a middle-aged person whose teeth had jade inlays, a custom of Maya royalty, and an inscribed human tibia, “a very, very rare find”, archaeologist Francisco Estrada-Belli told the Guardian.

“It could be from an ancestor or captive of war”, he said, though the researchers will have to wait for an epigrapher with scanning equipment to read the badly eroded text. 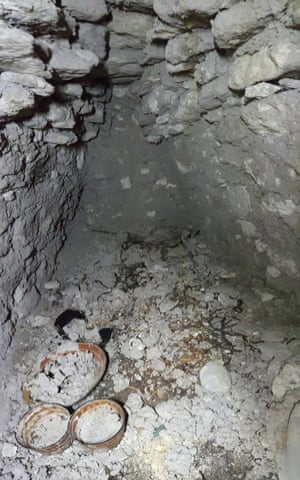 In Tikal, another site in Guatemala, researchers have previously found a similar carved bone that bore the name and image of a captured warrior, said Rosemary Joyce, an anthropologist at UC Berkeley who was not involved in the excavation. She cautioned that the bones would need examination by a physical anthropologist before their confirmation as human: “When you take a human femur and cut the ends off, deer bone can look like that.”

A carved frieze near the tomb depicts five rulers, but the person in the tomb is probably not one of them, Estrada-Belli said, because ceramics found in the tomb suggest the person lived long after those kings. The team also found a conch shell that had been made into a scribal ink pot and artifacts made of jade, obsidian, human bone, ceramics and marine shells. 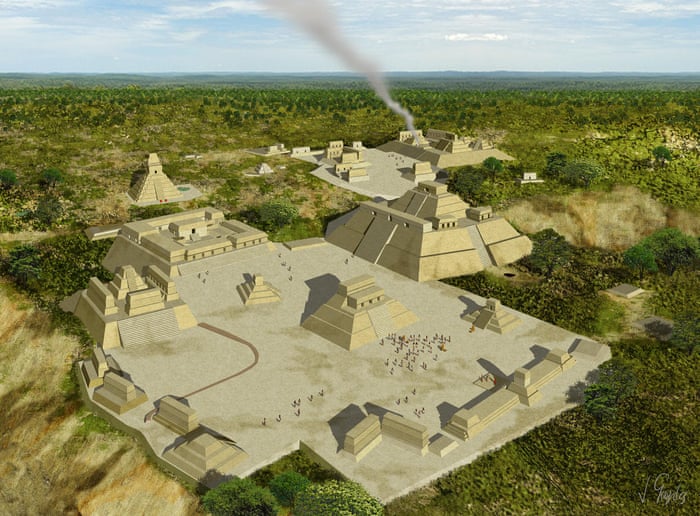 The second tomb was found in a separate pyramid, and its two chambers seem to have been palace rooms converted into a tomb, the researchers said. They found remains of a middle-aged person, a large masonry bench, and offerings of ceramic, bone and jade, including a necklace, which Estrada-Belli called “the first major find of this kind”.

The team’s epigrapher, Alexandre Tokovinine, said that this is the first finding of a jade artifact with the name of a snake king. The inscription on the necklace, which holds a carved cormorant’s head that morphs into the image of a sun god, is unusual because it belongs to a king from an entirely different city: “Yuknoom Ti’ Chan, Holy king of Kaanul.”    The king was a member of the snake dynasty, 100 miles from their ancient capital of Dzibanche, which stands in modern Mexico.

“It looks a lot like Game of Thrones or medieval Europe,” Estrada-Belli said. The snake kings stretched their influence far to the south of that city, and warred with Tikal for power over smaller kingdoms such as Holmul, Naranjo and Xunantunich. “It’s all being debated, but this jewel tells us that the dynasty’s relationships were quite pervasive, and even a secondary kingdom like Holmul could have a direct relationship with the overlord.”