Skip to content
You are here
Home > OTHER > ‘Ancient pyramid’ discovery key to Nikola Tesla’s communication with aliens, says expert

OTHER
Pseudoscientist Semir Osmanagić claims a series of triangular-shaped hills in his native Bosnia, are artificial pyramids that are bigger and older than those in Egypt.

Despite mainstream archaeologists saying they are just natural rock formations, Mr Osmanagic has made another bold claim that he has found Nikola Tesla’s so-called “torison fields of standing energy” at the Bosnian Pyramids site, which means we could now “communicate with aliens”.

Mr Telsa was a Serbian-American inventor, physicist, and futurist, who contributed to the design of the AC electricity supply system in 1888.

His ideas became more left-field and experimental towards the end of the 1800s, and he devised the theory of “standing waves” of energy coming from Earth that meant electricity could be transmitted wirelessly over long distances.

Mr Osmanagić has claimed the alleged discovery at one of the “34,000 year old” pyramids he calls the Pyramid of the Sun “changes the history of planet” and could lead to intergalactic communication.

He wrote: “The discovery of Tesla’s standing waves at the top of the Bosnian Pyramid of the Sun— which are believed to travel faster than the speed of light, while not losing strength as they pass through cosmic bodies—prove the existence of something referred to as a cosmic web or cosmic internet which allow for a immediate intergalactic communication throughout the universe. 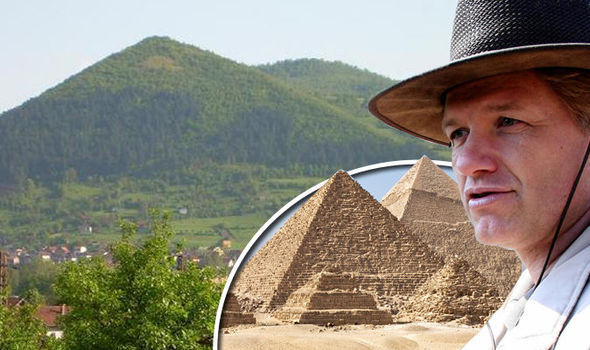 The Bosnian Pyramids are a source of the alleged standing waves of energy theorised by Nikola Tesla.

“Recorded energetic phenomena above the Pyramid of the Sun at Visoko seek a different definition of a pyramid compared to conventional, dogmatic explanations.

“The pyramids are energy boosters that send and receive information through the Sun.”

Tesla devised a theory of standing waves saying they travel faster than light, meaning they could “move through other cosmic bodies without wasting energy.”

Mr Osmanagić claims on the surface of and underneath the Bosnian Pyramid of the Sun, archaeological digs have found quartz crystals. The crystal is present in the underground tunnels as well, a mineral he says receives then amplifies energy.

Yet, the discovery of the alleged energy source, is founded on earlier unproven pseudo archaeology and .

He claims there are seven levels of tunnels inside the pyramid and that this amplifies the intensity of the energy.

A Finnish researcher called Mika Virpiranta alleged that there are 26 “volcanic lines” leading to the Bosnian Pyramid of the Sun.

Mr Osmanagić said this shows the importance of the location of the pyramids in Visoko, because volcanoes are energy sources.

He wrote: “In addition, if we observe the precise positions of the series of pyramids in Visoko…and observe elements of sacred geometry, we notice that the entire area was designed to create a very powerful energy complex that we refer to as the Bosnian valley of the pyramids.”

Mr Osmanagić has come in for great criticism from more mainstream archaeologists, who doubt his whole pyramids theory.

He said: “My research and arguments that the pyramids were built worldwide, and that the oldest pyramids are also the most superior ones, has led to situations where Egyptologists have created a wall of hostility towards me.

“Our evidence which points that the oldest and concrete of the highest quality on Earth can be found at the Pyramid of the Sun, and the existence of the largest networks of prehistoric tunnels has resulted in written petitions being sent to the European Archaeological Association against our research.

“However, time and scientific arguments confirm that we were right and they are wrong.”

Remarkably, Osmanagić also supports the ancient aliens theory that advanced beings came to Earth thousands of years ago to help build the pyramids.

He added: “Life originated thanks to an intervention on our planet, species on Earth change in the long term through experiments where evolution plays a minor role, and homo sapiens is the result of genetic engineering.

“And, of course, we are not the first nor the most advanced civilisation in the history of the planet.”

Boston University’s archaeological professor, Curtis Runnels, has been one of many to attempt to put the Bosnian Pyramid claims to bed.

He said: “Early prehistoric cultures, including village farmers of the Neolithic period [back to 9,000 years ago], and before them Stone Age hunters and gatherers, did not have populations large enough or social structures organised in ways that would have permitted the creation of pyramids on a large scale.

“Pyramidal shapes offer the least resistance to such forces, and are common forms in nature.”