These mysterious images are allegedly proof that ‘invisible Alien entities ARE here on Earth’.

Photograph of an ITE-2 displaying intelligent movement. Dr. Santilli states that the entity consists of lights of different colors that are pulsating and move synchronously according to a complex trajectory during the 15 seconds of exposure, including a point in which motion stopped for a few seconds, to resume thereafter.

Researchers seeking evidence of anti-matter in the universe firmly believe they have come across a previously unknown ‘invisible life form’ on planet Earth.

The group of researchers that discovered the mysterious entities work at Thunder Energies Corporation, an optics, nuclear physics, and energy company. According to them, these mysterious entities inhabit the Earth’s atmosphere. The company is run by controversial Harvard-educated nuclear physicist Dr. Ruggero Santilli. Dr. Santilli is regarded by many as an expert in mathematics and physics and has already been nominated for Nobel Prizes in Chemistry and Physics. Dr. Santilli developed a revolutionary telescope which was designed to spot antimatter-light in the cosmos. Contrary to conventional telescopes, which are made from Convey Lenses, the Santilli telescope is made from Concave lenses.

By using telescopes with concave lenses, known as Santilli telescopes (trademark and patent pending by the U.S. publicly traded company Thunder Energies Corporation), we review preceding evidence for the apparent existence of antimatter galaxies, antimatter asteroids, and antimatter cosmic rays. Independently from these astrophysical detections, we present for the first time evidence for the apparent existence of entities in our terrestrial environment that are solely visible via telescopes with concave lenses, while being invisible to our eyes and to conventional Galileo telescopes with convex lenses, which entities leave dark images in the background of digital cameras attached to the Santilli telescopes.

The new report, which was published in the American Journal of Modern Physics revealed a controversial finding which suggests, for the first time ever, the existence of entities in our terrestrial environment which are INVISIBLE to our eyes and conventional telescopes made from convex lenses.

The detection of invisible terrestrial entities was published in the paper: .

In the study, Santilli states:

“To his great surprise, unidentified yet clearly visible entities immediately appeared on the screen of the camera attached to the Santilli telescope, without any enlargement, without the same entities being visible to the naked eyes, and without any corresponding image existing on the screen of the camera attached to the Galileo telescope. This unexpected discovery triggered a novel systematic use of the pair of Galileo and Santilli telescopes, this time, for the search of entities, here called Invisible Terrestrial Entities, that are invisible to our eyes as well as to our optical instruments with convex lenses, but are otherwise fully visible via the Santilli telescope with concave lenses, and are located in our terrestrial environment.” () 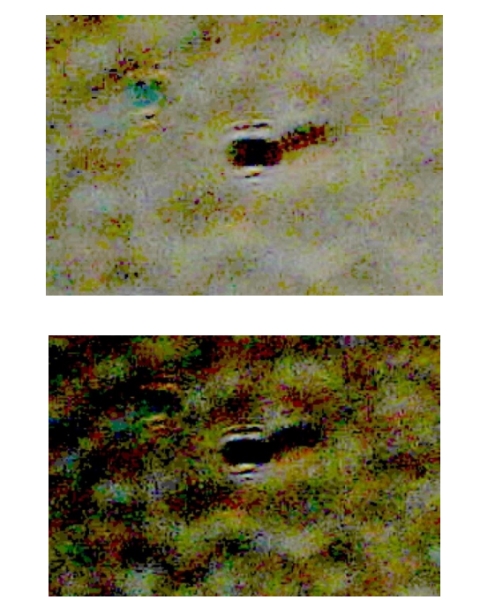 A view of an Invisible Terrestrial Entity of the first kind (ITE-1) detected in two different photos on September 5, 2015, in the evening sky over Tampa Bay. Florida, via the pair of 100 mm Galileo and Santilli telescopes with Sony Camera SLT-A58K set at ISO automatic and 15 seconds exposure. The entity is classified as an ISE-1 because it is solely detected via the Santilli telescope (thus emitting light with a negative index of refraction), and it leaves a black image in the background of the digital camera (thus emitting light with negative energy).

In post-observations, Dr. Santilli identified two different types of Invisible Terrestrial Entities or ITEs, acknowledging that further types of entities may be identified in the near future. Dr. Santilli states that both types of ITEs have been independently verified by fellow scientists and their existence was confirmed in a lecture at the St. Petersburg Astronomy Club on September 25, 2015.

The first type of ITE is defined by Dr. Santilli as entities that:

According to reports, these entities moved slowly and rotated. Dr. Santilli states that this particular type of movement excludes impurities in their telescopes since some have already speculated that these entities were factual errors in the telescope lens or in the camera.

Santilli notes that the emission of antimatter-light does not mean that the entity is made up of antimatter because the existence of the entities within our atmosphere would imply a cataclysmic explosion due to matter-antimatter annihilation. ()

Santilli writes that: ITE-1 consist of matter-entities in our terrestrial environment achieving locomotion via the acquisition of antimatter in their interior with consequential use of matter-antimatter propulsion and achieve invisibility via the emission of antimatter-light as a sort of exhaust. ()

Santilli defines the Second Type of Entities (ITE-2) as:

Santilli continues in his study stating: “Consequently, both ITE-1 and ITE-2 have a negative index of refraction when propagating in a matter medium such as glass. Their main difference is that the former entities, also called dark ITE, carry negative energy, thus causing dark images in the background of a camera attached to Santilli telescopes, while later entities, also called bright ITE, carry positive energy, thus causing bright images despite their negative index of refraction.”

Dr. Santilli states that ITE-2’s were moving and pulsing backward and forward when they were seen by the Santilli telescopes, suggesting that they were: “conducting unauthorized surveillance of the Tampa Area solely visible with the Santilli telescope, thus confirming the need for systematic views of sensitive civilian, industrial and military installations”.