“…based on new data, evidence that during this period of Earth-like climate, biological evolution produced, at length, a humanoid civilization leaving ruins at several sites, Cydonia Mensa and Galaxias Chaos being two sites most intensively investigated. Data from these sites formed the basis for the Cydonian Hypothesis (Brandenburg, DiPietro, and Molenaar, 1991) of an ancient, indigenous, approximately Bronze Age civilization on Mars.”

“Mars xenon is found to match closely the component in the Earth’s atmosphere produced by Earth’s nuclear weapons programs, both hydrogen bomb testing, and plutonium production, both of which involve large amounts of fission with fast neutrons. It is found that Mars xenon can be approximately by a mixture of 70% Nuclear Testing xenon, mixed with 30% natural Earth xenon, suggesting that Mars xenon was similar to Earth’s before a large nuclear event altered it dramatically.”

Mars is unlike any other celestial body in our solar system. Since time immemorial, the red planet ahs captured the imagination and interest of people around the globe, from the time of the Aztec, Inca, and Mayan empires, to modern society and the 21st century.

But what is is about Mars that makes us want to understand everything about it? Are we interested in Mars because we think there could be life there? Are we so interested ni the red planet because there is a possibility that an advanced civilization may have flourished there once?

Is it ludicrous to think that life may have flourished once on Mars? According to a scientist who has worked on worked on space plasma technologies, nuclear fusion, and advanced space propulsion, and invented the  using water propellant for space propulsion, no, and Mars may have once sustained an extremely advanced alien civilization.

Dr. John Brandenburg, a plasma physicist working as a consultant at Morningstar Applied Physics LLC and as a part-time instructor of Astronomy, Physics and Mathematics at Madison College, and other learning institutions in Madison, Wisconsin, believes hat in the distant history of Mars, when the red planet was much more similar to Earth, advanced alien civilizations developed there, and evidence of their existence can be found on the red planet today.

“Mars presents the human race with a Darwinian intelligence test, and so far, we are failing it. Scientists cannot connect the dots at Mars because the resulting picture is too terrifying to accept.” ()

Not only does Dr. Brandenburg believe Mars was once inhabited, but he believes that data from Mars shows clear evidence of ‘weapon-signature’ isotopes, proving two massive nuclear “airbursts” in the Northern regions of Mars had occurred in the distant past.

“Mars xenon is found to match closely the component in the Earth’s atmosphere produced by Earth’s nuclear weapons programs, both hydrogen bomb testing, and plutonium production, both of which involve large amounts of fission with fast neutrons. It is found that Mars xenon can be approximately by a mixture of 70% Nuclear Testing xenon, mixed with 30% natural Earth xenon, suggesting that Mars xenon was similar to Earth’s before a large nuclear event altered it dramatically.” 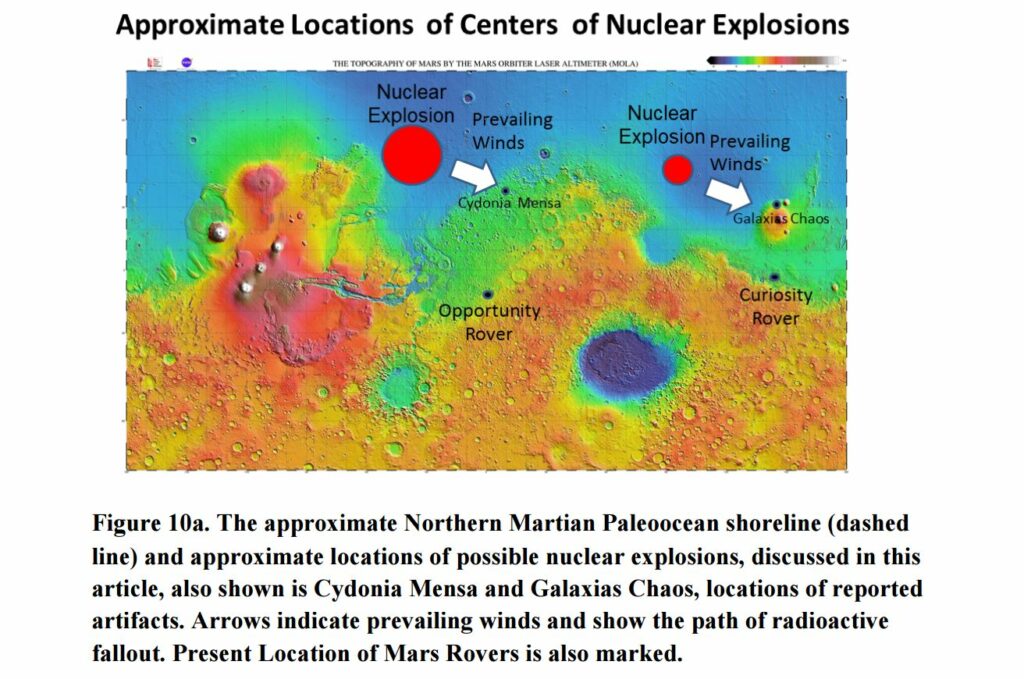 As it turns out, Gas Isotope Xenon 129 is produced by NUCLEAR REACTIONS.

Xenon 129 is produced only in small amounts by normal fission, but in a conventional hydrogen bomb explosion, it is produced in large amounts.

Mars: The early Earth of our solar system?

“The more we observe Mars, the more information we’re getting that it really is a fascinating planet, from the Curiosity Rover we now know that Mars once was like a planet very much like Earth, with long salty seas, with fresh water lakes, probably with snowcapped peaks and clouds and a water cycle just like we’re studying here on Earth … Something has happened to Mars; it lost its water.” – John Grunsfeld, five-time space flown astronaut, Associate Administrator Head of NASA Science Mission Directive.

Dr. John Brandenburg believes that there is clear evidence that at least two major nuclear explosions occurred on Mars, and that anyone who can read a map can find a correlation between Cydonia Mesa and Galaxias Chaos, and evidence of shock-waves and fallout downwind.

“Secrecy within government is an evil that’s sometimes necessary, but I think it’s a good thing that this cover-up on Mars is ending, and, hopefully at some point, we can sit down and have a frank conversation not about what happened on Mars 250 million years ago but what is happening right now.”