Skip to content
You are here
Home > OTHER > WHAT IS IT? Sinister giant black ring ‘portal’ in sky sparks fears of alien attack

OTHER
Stunned witnesses in Novosibirsk city, Russia, are heard calling out to each other at the sight of the eerie ring which remained in the sky before disappearing into clouds.It was filmed above the Siberian Mall shopping centre and footage of the event has gone viral online after it was uploaded to social media.One viewer wrote: “This looks like some kind of creepy warning.”

Another commented: “It’s a kind of supernatural power flying across the city!”

And a third replied: “Aliens are coming to get us! Scary!” 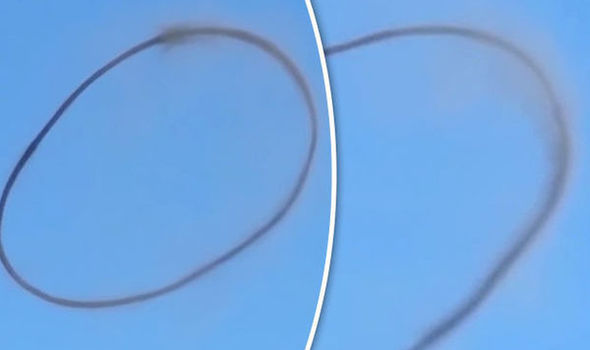 The dark ring sparked fears of an alien invasion but was likely to be from a firework.

An actual witness speculated that it was a weather event.

They said: “The smoke ring is nothing but a soliton.

“Black hydrocarbon with the vortex making up a ring and lifting it into the air.”

But a weather expert, who remained stumped about what the black ring was, did not agree.

Renad Yagudin of the Siberian Hydrometeorological Centre said: “There is no such definition in meteorology as a soliton.