A conspiracy theorist has claimed that Jesus will return to Earth this month, guiding his people to heaven and leaving the planet totally sterile for 1,000 years.

Nora Roth, a Christian computer programmer, says she has performed complex calculations which suggest the apocalypse will occur by the end of 2016.

At that point, ‘everlasting righteousness will be brought in’, and Earth will be ‘left to rest’ for a millennium.

Ms Roth writes: ‘In the fall [autumn] of 2016, the 6,000 years of sin on earth will come to an end, everlasting righteousness will be brought in, and Jesus will come again to take His people to heaven.’

Ms Roth believes that each person has a probation time on Earth.

Ms Roth’s calculations are based on an excerpt from the Bible’s Book of Daniel, which tells the story of the Jewish people’s forced relocation to Babylon. 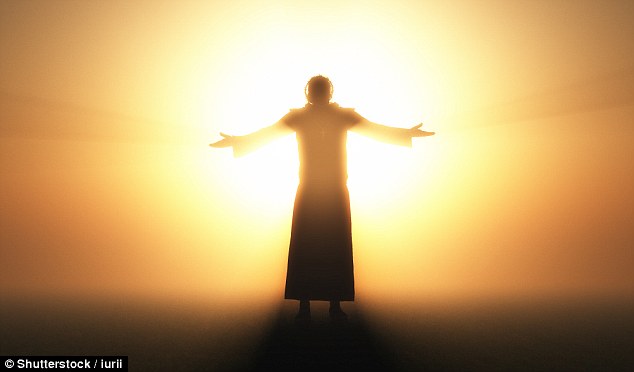 Nora Roth claims that by the end of the year, 6,000 years of sin on earth will come to an end and Jesus will come again to take His people to heaven (artist’s impression)

In the story, Gabriel says that ‘Seventy sevens are decreed […] to put an end to sin.’

Ms Roth believes that ‘sevens’ refers to a Jubilee cycle, which is a unit of time.

The Bible states that the working week should be six days long, with a rest day on Sunday.

This also extends on a larger scale, and Ms Roth says that God ‘told the children of Israel to plant and to harvest their land for six years and then let the land rest the seventh year.’

People who doubt the moon landings are more likely to be selfish and attention-seeking, according to a study earlier this year.

Over the course of three online-based studies, researchers at the University of Kent showed strong links between the belief in conspiracy theories and negative psychological traits.

Writing in the journal , the team explained: ‘Previous research linked the endorsement of conspiracy theories to low self-esteem.’

In the first study, a total of 202 participants completed questionnaires on conspiracy beliefs, asking how strongly they agreed with specific statements, such as whether governments carried out acts of terrorism on their own soil.

Alongside this, they were asked to complete a narcissist scale and a self-esteem assessment.

The results showed that those people who rated highly on the narcissism scale and who had low self-esteem were more likely to be conspiracy believers.

A Jubilee Cycle consists of seven of the larger units, followed by a year of rest – a total of 50 years.

Ms Roth writes: ‘The 70 Jubilees began in 1416 BC when God’s children entered Canaan.

But Nigel Watson, author of the UFO Investigations Manual, says the predictions have little evidence to them.

Mr Watson told MailOnline: ‘Obscure numbers and codes are loved by fearmongers, and by using them to predict the end of the world, they show they have an insight into the mind of God and/or the workings of the Universe.

‘Using knowledge of past predictions, and the fact we are still here, I predict we shouldn’t worry about this latest revelation.’

This is not the first claim that the world will end in 2016 due to the second coming of Jesus.

In , a video posted on YouTube claimed that a magnetic polar flip would trigger worldwide earthquakes and a ‘rolling cloud’ that would destroy the world.

End Times Prophecies, who posted the video, claimed that the Earth is currently overdue a magnetic flip, and predicted it would happen in July as it overlapped with the ‘second coming of Jesus.’

Luckily for us, the world did not experience a magnetic polar flip, and did not end in July.